The http2 protocol Is nearly here at Cpanel Ireland

Enough about the background, the history and politics behind what got us here. Let's dive into the specifics of the protocol: the bits and the concepts that make up http2.

http2 is a binary protocol.

Just let that sink in for a minute. If you've been involved in internet protocols before, chances are that you will now be instinctively reacting against this choice, marshaling your arguments that spell out how protocols based on text/ascii are superior because humans can handcraft requests over telnet and so on...

http2 is binary to make the framing much easier. Figuring out the start and the end of frames is one of the really complicated things in HTTP 1.1 and, actually, in text-based protocols in general. By moving away from optional white space and different ways to write the same thing, implementation becomes simpler.

Also, it makes it much easier to separate the actual protocol parts from the framing - which in HTTP1 is confusingly intermixed.

The fact that the protocol features compression and will often run over TLS also diminishes the value of text, since you won't see text over the wire anyway. We simply have to get used to the idea of using something like a Wireshark inspector to figure out exactly what's going on at the protocol level in http2.

Debugging this protocol will probably have to be done with tools like curl, or by analyzing the network stream with Wireshark's http2 dissector and similar. 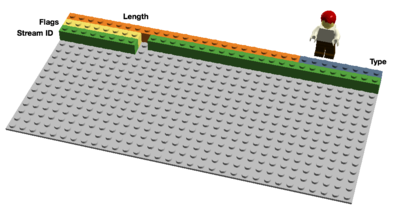 http2 sends binary frames. There are different frame types that can be sent and they all have the same setup: Length, Type, Flags, Stream Identifier, and frame payload.

There are ten different frame types defined in the http2 spec and perhaps the two most fundamental ones that map to HTTP 1.1 features are DATA and HEADERS. I'll describe some of the frames in more detail further on.

The Stream Identifier mentioned in the previous section associates each frame sent over http2 with a “stream”. A stream is an independent, bi-directional sequence of frames exchanged between the client and server within an http2 connection.

A single http2 connection can contain multiple concurrently-open streams, with either endpoint interleaving frames from multiple streams. Streams can be established and used unilaterally or shared by either the client or server and they can be closed by either endpoint. The order in which frames are sent within a stream is significant. Recipients process frames in the order they are received.

Multiplexing the streams means that packages from many streams are mixed over the same connection. Two (or more) individual trains of data are made into a single one and then split up again on the other side. Here are two trains:

The two trains multiplexed over the same connection:

Each stream also has a priority (also known as “weight”), which is used to tell the peer which streams to consider most important, in case there are resource restraints that force the server to select which streams to send first.

Using the PRIORITY frame, a client can also tell the server which other stream this stream depends on. It allows a client to build a priority “tree” where several “child streams” may depend on the completion of “parent streams”.

The priority weights and dependencies can be changed dynamically at run-time, which should enable browsers to make sure that when users scroll down a page full of images, the browser can specify which images are most important, or if you switch tabs it can prioritize a new set of streams that suddenly come into focus.

HTTP is a stateless protocol. In short, this means that every request needs to bring with it as much detail as the server needs to serve that request, without the server having to store a lot of info and meta-data from previous requests. Since http2 doesn't change this paradigm, it has to work the same way.

This makes HTTP repetitive. When a client asks for many resources from the same server, like images from a web page, there will be a large series of requests that all look almost identical. A series of almost identical somethings begs for compression.

While the number of objects per web page has increased (as mentioned earlier), the use of cookies and the size of the requests have also kept growing over time. Cookies also need to be included in all requests, often the same ones in multiple requests.

The HTTP 1.1 request sizes have actually gotten so large that they sometimes end up larger than the initial TCP window, which makes them very slow to send as they need a full round-trip to get an ACK back from the server before the full request has been sent. This is another argument for compression.

Compression is a tricky subject

HTTPS and SPDY compression were found to be vulnerable to the BREACH and CRIME attacks. By inserting known text into the stream and figuring out how that changes the output, an attacker can figure out what's being sent in an encrypted payload.

Doing compression on dynamic content for a protocol - without becoming vulnerable to one of these attacks - requires some thought and careful consideration. This is what the HTTPbis team tried to do.

Enter HPACK, Header Compression for HTTP/2, which – as the name suggests - is a compression format especially crafted for http2 headers, and it is being specified in a separate internet draft. The new format, together with other counter-measures (such as a bit that asks intermediaries to not compress a specific header and optional padding of frames), should make it harder to exploit compression.

In the words of Roberto Peon (one of the creators of HPACK):

“HPACK was designed to make it difficult for a conforming implementation to leak information, to make encoding and decoding very fast/cheap, to provide for receiver control over compression context size, to allow for proxy re-indexing (i.e., shared state between frontend and backend within a proxy), and for quick comparisons of Huffman-encoded strings”.

One of the drawbacks with HTTP 1.1 is that when an HTTP message has been sent off with a Content-Length of a certain size, you can't easily just stop it. Sure, you can often (but not always) disconnect the TCP connection, but that comes at the cost of having to negotiate a new TCP handshake again.

A better solution would be to just stop the message and start a new. This can be done with http2's RST_STREAM frame which will help prevent wasted bandwidth and the need to tear down connections.

This is the feature also known as “cache push”. The idea is that if the client asks for resource X, the server may know that the client will probably want resource Z as well, and sends it to the client without being asked. It helps the client by putting Z into its cache so that it will be there when it wants it.

Server push is something a client must explicitly allow the server to do. Even then, the client can swiftly terminate a pushed stream at any time with RST_STREAM should it not want a particular resource.

Each individual http2 stream has its own advertised flow window that the other end is allowed to send data for. If you happen to know how SSH works, this is very similar in style and spirit.

For every stream, both ends have to tell the peer that it has enough room to handle incoming data, and the other end is only allowed to send that much data until the window is extended. Only DATA frames are flow controlled.